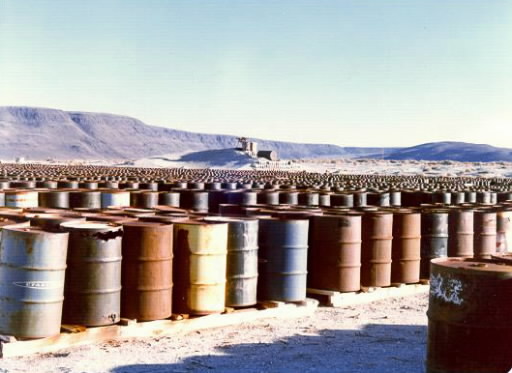 Oregon environmental regulators have cut a tentative deal with a herbicide manufacturer that makes taxpayers responsible for roughly three-quarters of monitoring and cleanup costs at Alkali Lake, one of Oregon's most contaminated dump sites.
The proposed agreement between Oregon's Department of Environmental Quality and the company would also keep in place up to 1.4 million gallons of herbicide production waste and a current gravel cap over the waste. That's instead of paying millions to clean up the site as favored by Lake County commissioners and the Oregon Natural Desert Association.
If a cleanup ends up being required down the line, expenses could go as high as $49 million, costing taxpayers up to $39 million.
As the Vietnam War raged, a Portland herbicide manufacturer now owned by Bayer CropScience shipped 25,000 barrels of highly toxic and in some cases carcinogenic waste to southeast Oregon's high desert from 1969 to 1971, including components of the Agent Orange herbicide widely used in the war.
In 1974, the state took over the site, later crushing and burying the leaking barrels, a low-cost option that scientific advisers opposed. Shallow groundwater at the site has since been contaminated, with a plume covering 40 acres.
DEQ officials said the proposed deal was the best Oregon could get without suing Bayer CropScience, in part because Oregon regulators signed off on using the Lake County site, now owned by the state, as a herbicide dump four decades ago.
The remoteness of the site also greatly reduces risks to people and animals, the state says, eliminating the need for expanded cleanup.
But critics call it a sweetheart deal for Bayer CropScience, which reported more than $8 billion in sales last year. They also want the dump cleaned up.
"The whole purpose of the hazardous waste remediation statute is to clean up hazardous sites and put the polluter on the hook," said Dave Becker, staff attorney for the desert association. "Instead, Bayer is only on the hook for a quarter of the costs, and they are immunized from having DEQ go back after them if 10 to 15 years from now it turns out original cleanup wasn't sufficient."
The proposed agreement would have Bayer CropScience pay $700,000 of a $2.45 million tab for state's past work at the site and expected future work.
The future work, estimated to cost about $200,000, is limited to monitoring groundwater at the site and maintaining an existing gravel cap over the 10-acre contamination zone.
If additional costs arise -- either through damage claims or a more complete cleanup of the site -- the state would pick up more than three-quarters of the bill.
Cost estimates to clean up or remove the soil range from $33 million to $49 million, a DEQ consultant said. Under the terms of the consent agreement, Oregon would pay $39.3 million of cost for the most expensive option, trucking soil to an offsite landfill.
The arrangement doesn't sit well with many in Lake County, said County Commission Chairman Bradley Winters, who noted that monitoring wells pull up groundwater samples the color of cherry Kool-Aid.
A 2005 risk assessment by a DEQ consultant concluded that risks from exposure to contaminated groundwater or wind-blown dust from the site fell below state and federal standards for people and animals, in part because of the site's remote location.
The state owns nearly 400 acres around the contaminated area, which sits 35 miles from Christmas Valley, the nearest town. It's surrounded with just under 4 miles of barbed wire fence. The groundwater plume does not appear to have moved for a decade, said DEQ project manager Bob Schwarz. And off-site tests indicate the gravel cap is containing contaminated dust.
The state initially asked Bayer CropScience to cover half the costs, said Jeff Christensen, manager of DEQ's emergency response and environmental cleanup program.
But the negotiations were complicated, Christensen said. The contamination happened long ago, many facts are contested, the state played a role and Bayer was unwilling to admit legal liability under state and federal cleanup laws.
"In my judgment, this is probably the best we can hope for through a negotiated process," Christensen said.
In a statement, Bayer CropScience called the proposed agreement "fair and appropriate."
The Crag Law Center, which represents the desert association, wants DEQ to hold public hearings in Portland and Lake County, and to conduct a more in-depth evaluation of potential harm from the site.
The public comment period on the proposed consent order ends today. Dick Pedersen, DEQ's director, would have to sign it, and a Lake County circuit judge would have to approve it. By Scott Learn