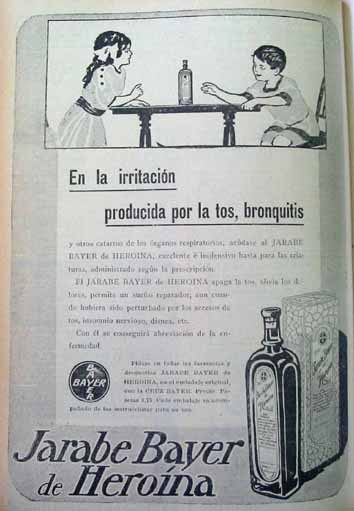 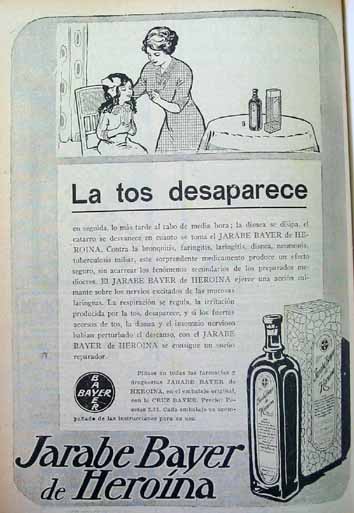 Yes, Bayer Promoted Heroin for Children -- Here Are The Ads That Prove It

It's not news that Bayer, the venerable German drug company, made its first fortunes in the late 1890s when it commercialized both aspirin and heroin as cough, cold and pain remedies. Many people have seen the sepia images of vintage Bayer's "Heroin" brand medicine bottles. But it's less widely known that Bayer promoted heroin for use in children suffering from coughs, colds and "irritation" as late as 1912, according to an anti-Bayer watchdog group.

That was years after reports first began to surface in 1899 that patients were developing a "tolerance" for Heroin, and that addicts in the U.S. were clamoring for more, according to this history of the drug.

The children's campaign ran in Spanish newspapers, according to the Campaign Against Bayer Dangers, a longtime company gadfly, which unearthed the forgotten images two days ago. One ad, urging the use of "Heroina" to treat bronchitis in kids, shows two unattended children reaching for a bottle of the opiate across a kitchen table. Another shows a mom spoon feeding it to her sickly little girl. "La tos desaparece," the ad says -- "the cough disappears":

Heroin was restricted to prescription-only use in the U.S. in 1914 and eventually banned by the nascent FDA altogether in 1924, except under very strict medical conditions.

Sure, it's a blast from the past that says nothing about Bayer's corporate culture today. But their sudden re-appearance is a chilling reminder of what life was like in the early 20th Century when companies were permitted to sell anything to anyone, no matter how dangerous, regardless of the consequences. By Jim Edwards