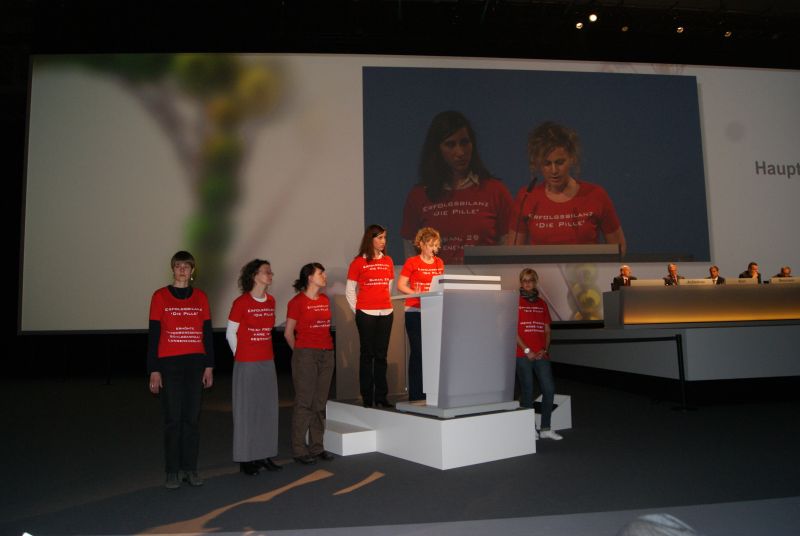 Bayer AG will pay at least $110 million to settle lawsuits over claims that its Yaz line of birth-control pills caused blood clots.

On this occasion the Coalition Against BAYER Dangers, which has been pointing out the dangers of Yaz for years, demands a ban on all contraceptive pills with a profile of increased side effects: 'The purpose of contraceptives is to prevent pregnancy and older drugs do that just as reliably as new ones. Most of the injuries caused by Yasmin and Yaz could be avoided. A change on the leaflet is not sufficient anymore,' says Philipp Mimkes, board member of the Coalition.

The Coalition has introduced a countermotion on the issue to the upcoming Bayer Shareholder Meeting, which takes place April 27 in Cologne/Germany (see full text below). The Coalition will discuss the motion within the meeting. Victims of contraceptive pills are also to speak at the venue. About 4,000 stockholders and the Bayer board will participate.

Yaz is heavily advertised, especially towards girls and young women, by promising weight reduction and acne relief. However, BAYER does not draw any attention to the more pronounced risk profile associated with products containing the hormone drospirenone. This leads to accidents and fatalities that could have been avoided. About 11,300 lawsuits are currently pending against BAYER in the US.

Countermotion: The actions of the members of the Bayer Board of Management are not ratified

Recent studies have again shown evidence of the increased potential risk of the contraceptive pills containing the active ingredient drospirenone which are marketed by BAYER: a study published in October came to the conclusion that users had a 75 percent greater risk of thrombosis than women who used older products. The medical records of more than 800,000 American women were evaluated for this on behalf of the U.S. Food and Drug Administration (FDA). Two studies recently published in the British Medical Journal even came to the conclusion that the risk of thromboembolism caused by drospirenone was 2.3 or 3.3 times higher than the risk caused by drugs containing the hormone levonorgestrel.

The Federal Institute for Drugs and Medical Devices (BfArM) also warned in December of the risks associated with contraceptive pills containing drospirenone.

At least 190 women have died in the United States alone after taking the product Yaz, and over 10,000 lawsuits are pending. In view of the unequivocal study conclusions, in January BAYER applied for a postponement of the court actions and held out the prospect of settlements. The lawsuits have now been postponed for three months and in the meantime BAYER has paid compensation to 170 women.

BAYER has so far not approached the women who have been harmed in Germany, however – probably because the courts in this country impose lower penalties. It is unacceptable for BAYER to apply double standards. The women who have been harmed by drospirenone everywhere – or their surviving dependents – must be compensated immediately. They must also be compensated for the cost of rehabilitation and drug products and loss of their earnings.

For reasons of profit, BAYER continues to refuse to withdraw all products containing the active ingredient drospirenone from the market. Sales last year remained almost unchanged at 1.07 billion. Its marketing, which is targeted at girls and young women in particular, also remains unchanged.

It should not be forgotten that contraceptive pills are intended to prevent pregnancy – and older products do this just as reliably as new ones. The serious injuries caused by Yasmin could largely be avoided. The Board of Management bears responsibility for this. BAYER probably reckons that the profits from continued sales are higher than the settlement payouts to more women who suffer injuries in the future.