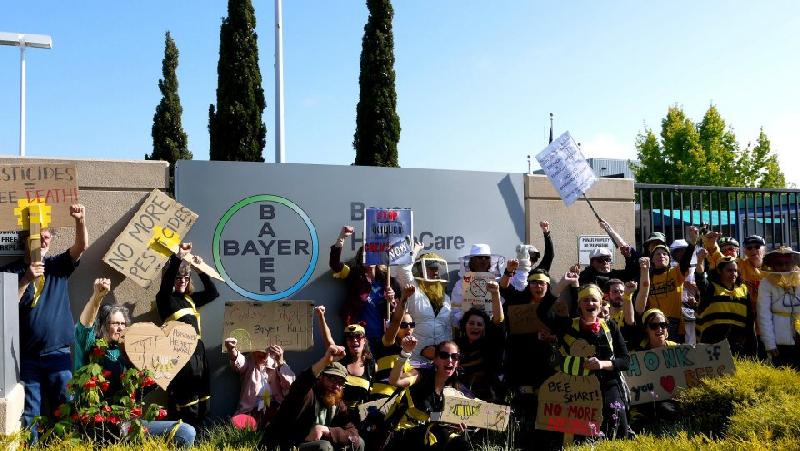 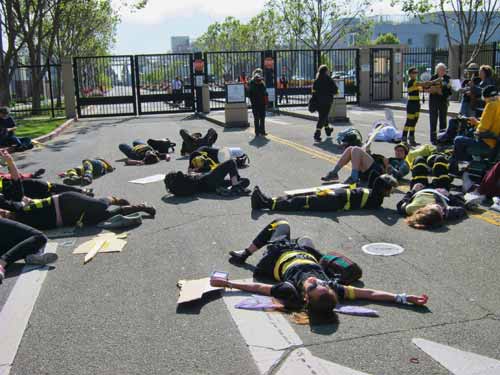 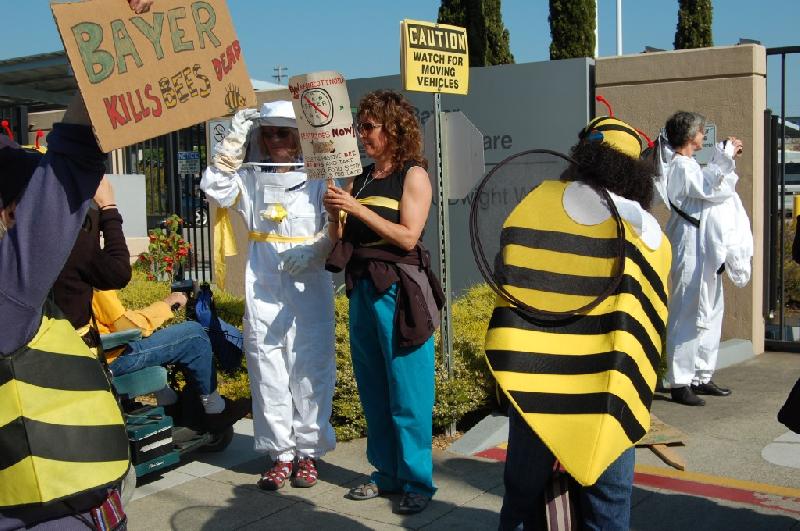 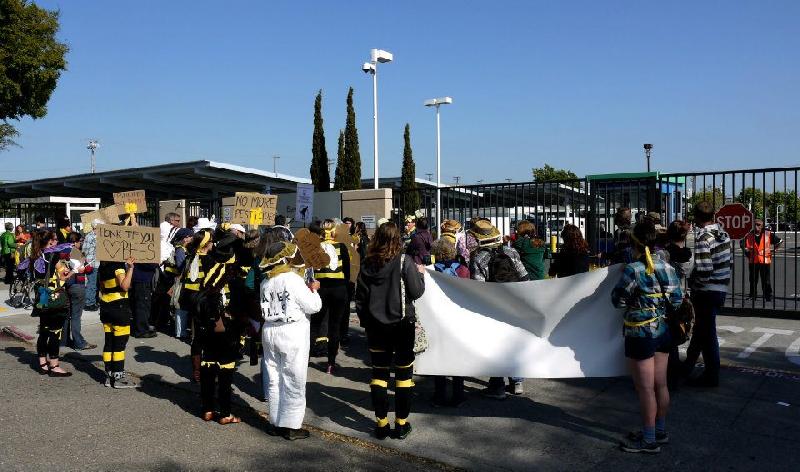 It was mid-afternoon on May 16 when more than 30 activists began arriving at San Pablo Park. The crowd was greeted by the lyrics of David Mallett's "Garden Song," performed by the guitar-wielding, guerilla trio known as Occupella. Passersby could tell this was not your average Berkeley demo (as if there were such a thing). First clue: Half the crowd was dressed up as bees.

This West Berkeley park was the staging ground for a self-declared human "Bee-in at Bayer." The goal: to call attention to the chemical maker's role in producing a pesticide linked to "Colony Collapse Disorder," a mysterious syndrome that suddenly turns once-healthy hives into empty shells devoid of bees.

"Our entire ecological system depends on pollinators," the organizers noted in a handout. "Ninety percent of our food crops are pollinated by bees." Occupella underscored this point by breaking into another song that chorused: "For every third bite of food, thank the bees."

In addition to protestors in bee-garb, several people showed up in full-body beekeeper suits, complete with netted hats. Turns out they really were beekeepers. Underneath one wide-brimmed and netted hat was Kathryn Gilje, co-director of the Pesticide Action Network. Asked how her backyard hive in Oakland was faring, she replied: "The bees are doing just great. Producing lots of honey." Not every hive is so lucky as to have a member of PAN as a caretaker.

Another less-fortunate local bee-host explained how she became concerned when her own local community of backyard bees suddenly started to spiral into decline. Her research led to the discovery of two neonicotinoid pesticidesImidacloprid and Clothianidin. Both are currently among Bayer's best-selling products.

The trade-off could not be clearer. While the EPA's review of neonicotinoid hazards is due to last through 2018, one third of the country's honeybees are continuing to vanish every year. As an emailed call-to-arms from the Berkeley East Bay Gray Panthers put it: "We can't afford to play the odds with extinction so that Bayer can continue to make exorbitant profits."

Bayer recently made good on a seven-year-old promise to halt production of Class 1 pesticides that threaten human health but has done nothing to reduce or halt the production of Clothianidin and Imidacloprid, both of which target "social insects" like bees. (A passing thought: Have you ever wondered whether pesticide companies intentionally create tongue-tangling names for their products? It certainly makes it hard to complain about a chemical if you can't even pronounce it.)

Back at the park, new volunteers, who arrived dressed in black, were being wrapped in circles of yellow ribbons that turned their black-bloc regalia into a rough semblance of apian attire. A few more heartfelt speeches and we were ready to march off to bee-devil Bayer the Slayer. The plan was simple: make a beeline for the Bayer plant on Ninth Street and "Swarm!"

A parade of people bedecked as bees is certain to stir up enthusiasm from neighbors and drivers and, sure enough, horns were tooted in sympathy as the colorfully bee-decked activists flashed signs reading "Honk If You Like Bees." One protestor was spotted holding a placard that read: "WASPS 4 BEES. White Anglo-Saxon Protestor Against Bayer." Another protest sign drew attention to Bayer's historic role as a major chemical weapons maker for Nazi Germany.

At one point, someone in the parade began singing, "All we are saying is: Give Bees a Chance." It caught on immediately. In between the chorus, the marchers also gave bees some chants (thanks to the family of one young agitator who stayed up late into the night crafting the following shout-outs): "Our Food System's Fallin' without the Bees' Pollen"; "Bees for Our Nation, Not for your Corporation"; "No Bees, No Farms, No Food"; and the inevitable "Whose Bees? Our Bees!"

As the bee-dazzled throng passed the Good Vibrations shop on San Pablo, a reporter pointed out the company's motto, painted on the front door: "Creating a buzz since 1977." Shouts of "Join us!" ensued.

While Bayer's Berkeley facility doesn't make Clothianidin, it's a fair target for anger directed at the parent company. When no one at the plant offered to meet with the circling swarm of drum-banging activists at the closed side gate, several organizers delivered a short speech and symbolically presented Bayer with the "Poisoned Heart Award." The prize took the form of a disgusting-looking plastic sack stuffed with lumps and oozing a thick coating of Hershey's chocolate sauce.
The swarm then took flight and alighted at Bayer's nearby Main Gate for a die-in.

One by one, the bees shook, stumbled, and fluttered to the ground. Their final, ad-libbed cries were poignant enough to elicit tears among the bystanders. "But I don't WANT to die!" moaned one young woman as she collapsed on the pavement. "My honey!" another woman cried out, "I haven't finished making my honey!"

As the bees sprawled silent and unmoving on the asphalt, bystanders looking past the metal gate blocking entry to the plant noticed a strange, sinister-looking cloud of vapor. It rose from behind a building and wafted slowly across the facility, driven by the evening's breeze. Below the cloud, two solemn protester stood holding a large banner. It read: “Mystery Solved! Bayer Is Killing Bees. By Gar Smith

"Bayer is killing bees, bring them to their knees!" buzzed our group of around 90 protesters dressed as bees and beekeepers as we marched from San Pablo Park to the East Bay headquarters of the international corporation, Bayer, to honor them with the satirical Poison Heart Award, for their outstanding role in global bee population decline. East Bay's Taking Back Our Food System organized the march and demonstration. And while many marchers are not directly involved with the Occupy movement, they are united over the common belief that our bees must be saved as many fruits and vegetables depend on bees for pollination.

Bee populations have been steadily declining for the past couple of decades and many scientists have attributed it to the increased use of pesticides in industrial agriculture. This trend is worrying because it not only endangers the livelihoods of thousands of beekeepers and small farmers, but puts the future of our global food system at risk. Honey bees pollinate 71 of the 100 most common crops, accounting for 90% of the world's food supply. Managed honey bees are the most economically important pollinator. In fact more than one in every three bites of food we eat depends on honey bees for pollination . Some scientists have even narrowed Colony Collapse Disorder (CCD), described as "the mysterious and massive die-off of bees across North America and Europe," to the use of a specific pesticide that is manufactured by Bayer's clothianidin and imidacloprid, first-generation neonicotinoids .

Bayer is not just the innocent aspiring manufacturer making aspirin.; They are one of the largest manufacturers of pesticides in the U.S. and around the world, along with other infamous companies such as Monsanto and Dow.

So how do neonicotinoids kill bees? Scientists have disclosed that neonicotinoids disrupt insects' central nervous systems," and "spread through the vascular tissues of plants." This is most disturbing because once the pesticides spread they are "toxic through entire growing seasons, including flowering times when bees consume their pollen." As pesticides infiltrate the bees' central nervous system, their learning and navigational abilities are disrupted. This also makes them susceptible to certain parasites. Essentially, the pesticides fog up the bees' brain and make it difficult for them to find their way back to the hive. Even If they are successful in making it back to the hive though, it is most likely that the pollen that the bee has extracted and brought back is infected with neonicotinoids, meaning the rest of the colony will be affected resulting in complete collapse of that bee colony.

Today pesticides are a prevalent part of the food and agricultural system, especially in the US. According to Pesticide Action Network (PANNA), 1,200 different pesticide active ingredients are approved and in use in 18,000 different product combinations. By contrast, France and Britain have registered around 500 and 300, respectively. Mixtures of these chemical cocktails not only infiltrate the bees' nervous system, but are stored in their wax and pollen, in the soil, and in water droplets exuded by trees, and even in nearby untreated land. This phenomenon creates a dangerous world of chemical exposure not only for the bees, but for humans, frogs, bats, and a wealth of other plants and animals that contribute to the health and biodiversity of our natural environment.

While Bayer scientists have continuously reported that there is no evidence that links neonicotinoids to the depletion of the bee population, there have been independent scientific studies conducted around the world that prove otherwise. On Wednesday, May 16 the Taking Back Our Food System protesters sent a message to BAYER to stop manufacturing these pesticides because without bees, there are no farms, which means there is no food. So, while the protesters may have looked a little crazy buzzing through the streets of Berkeley, they did it and will continue doing it because bees are crucial to the survival of the human population, and it's essential to protect them so that then can do their jobs, and we can continue to eat a variety of nutritious fruits and vegetables. By Yvette Cabrera