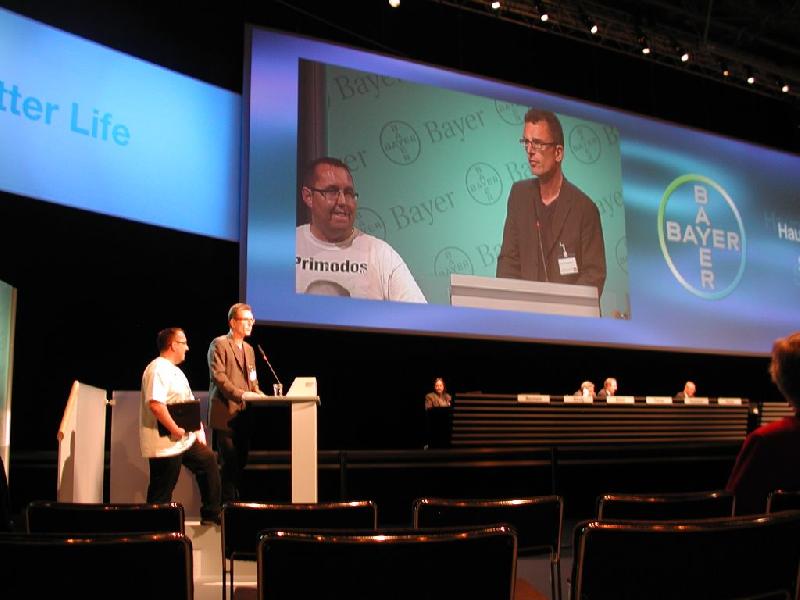 My name is Karl Murphy, I am 36 and live in Liverpool, England.
I know that Schering/Bayer board and shareholders may be thinking here we go again; another person who says they have been damaged by our chemicals, but I ask you all to please just listen to what I have to say and what I have brought with me.

In 1969 my mum thought she was pregnant. She went to her doctors to ask him to confirm this. The doctor said to my mum she had to take two tablets which he handed to her out of his office draw. They were called PRIMODOS, a hormone pregnancy test equal to 80 contraceptive pills taken as 2 tablets. My mum took these as instructed, and a few weeks later she mis-carried. Primodos was produced by Schering which is now part of Bayer.

In June 1972 Mum thought she was again pregnant. She went to the doctors for confirmation, and as previously the doctor advised her to take the same two tablets which were handed to her out of his office draw; PRIMODOS. My mum explained to him that she had taken this last time and had miscarried. He said it would not happen again, just take them.

I have my mums medical notes and on 2 occasions Primodos is showing, and has been circled by the doctor. I have been passed to me, copies of other peoples medical notes and these also show that they were prescribed primodos. They also gave birth to babies with deformities. My mum and these other ladies, have all had other children later on, none of whom have been born with any disabilities at all. Were these people used as guinea pigs to trial this drug? There were never any warnings on the boxes of PRIMODOS, but in the later years, Schering did place warnings on them stating “not to be taken if pregnant or if you suspect you are pregnant. WHY WAS THIS? I am aware that there were no advantages for women to take these tablets?

My life has been hell from birth, operation after operation to try to sort out the mess this drug has left me in. I never asked to be like this, but have just had to face life and the knockdowns and kicks that have been thrown at me.
I attended school having to be left out of activities because people classed me as a monster due to my hands and feet. I faced constant taunting by other children. The names that I was called were lobster hands, flipper, funny fingers, spazy hands, knuckles. I walked around the playground by myself with no friends due to my disability. I sat at a table by myself, trying to eat my dinner the best way I could. I was classed as a loner because no one wanted to be associated with a monster. I grew up with low self esteem. I could not hold handle bars on my bike, and even now I struggle to get dressed, fasten buttons and do up zips. Cutting up my food, even opening doors and bottles is extremely difficult. I am not able to cook food due to the fact that I cannot hold pans. When paying for items in shops, the assistants move their hands away from mine when paying.

I applied for job after job. I got to the interviews, but as soon as the interviewer saw my hands I knew it was going to be NO. I cant go on holiday as insurance companies refuse me because of my disability. I was unable to go onto fairground rides as I could not grip onto safety bars. Never went swimming as people would stare at me and point at my hands and feet. When any home improvements need to be carried out on my property, I have to have contractors to do these, as I cant hold any tools. Something as easy as changing a light bulb or a plug, I also need to pay somebody else to do it for me. All out of my own money. I can not take part in sports activities due to my disability, I have to pay myself for prescription pain killers because of my hands and feet.

I am requesting Schering/Bayer to hold their hands up and admit that they got this drug wrong. I can accept that mistakes do happen in the world, but when these happen it would be nice for someone to admit they got it wrong and help the victims who have been damaged by their actions. I would like to ask Schering/Bayer today, why did you let this drug Primodos carry on being used when you were told that the deformity rate was increasing and the drug was being used more and more?

I know Schering/Bayer always maintained that this drug never affected anybody and the deformities were not caused by PRIMODOS. I have a number of reports with me today, stating that Schering made an out of court offer to a lady whose child had been damaged by Primodos.

Why were these agreements not offered to all the victims?
Why did one of Schering employees offer this lady documents regarding Primodos, and request £10,000 for them?.
Why didnt Schering react even when their own employees warned of higher deformity rates in areas were Primodos/Duogynon was in use?
Have there been any talks between Bayer and the Government or Authorities, to help these victims?

Dr Peter Longthorne has sent me another email stating “I must confirm what I said in my email 16 October 2007. Bayer Plc no longer has any documents in its archives regarding Primodos. In respect of what action you now take, clearly that is something for you to decide.

This is why I am here today. I must be the only person in the world with all the documents regarding Primodos which go back to 1970.

How can Bayer answer any questions at this conference today regarding Primodos, when Dr Peter Longthorne and Natalie Lockyer from Bayer PLC of the UK, have confirmed they no longer have any information regarding Primodos?
I am asking Schering/Bayer board to approach me by the end of this conference today, to speak to me regarding this drug. I have brought 4 files with me, which include copies of my own research which I have carried out over a number of years. I have original paperwork from over 30 years ago regarding this drug, together with tests which were carried out on this drug. I also have letters from the Department of Health and the Lancet medical journal, advising Doctors to cease prescribing PRIMODOS as a pregnancy test. This was 10 years prior to them actually taking it off the market. I also have a copy of a news programme which I appeared in, in connection with PRIMODOS.

I ask all the people here today if this drug is used to prevent pregnancy why was the 10MG of Norethisterone Acetate in each tablet in Primodos. This means 20MG of Norethisterone Acetate was taken to test if the lady was pregnant. I ask you to think about this. I have got 100% proof on a primodos box which can be seen. If you would like to see this please contact me.

I also have a documentary from 1980 which was filmed about PRIMODOS. There are a number of Professors and Doctors who are interviewed on this film in which it is said that the contraceptive pill is a spin off from the drug Primodos. I have copied these documentaries and have placed them in the files I have brought with me.
In my eyes Bayer Schering are trying to sweep this under that big carpet and keep it quiet from the public. They don`t seem to have any concern regarding the terrible deformities have been left with after being given primodos.

I have been cheated out of life, all because of 2 tablets made by Schearings/Bayer which needed to be tested on people, and this is the outcome.
I am asking you all to think of your own children, and how they would cope with the difficulties of life and the heartache and taunting that myself, and my family have had to put up with in the last 36 years. How would they cope being singled out in everyday life.

Now that Schering has a new owner, do you not think it is the right moment to take a step towards its Primodos/Duogynon victims?

I appeal to Bayer today, to apologise in the name of their daughter company Schering, and to compensate the victims.

If you would like to contact me for any of the information in these file, please feel free to e-mail me at KCBM@BLUEYONDER.CO.UK
Thank You