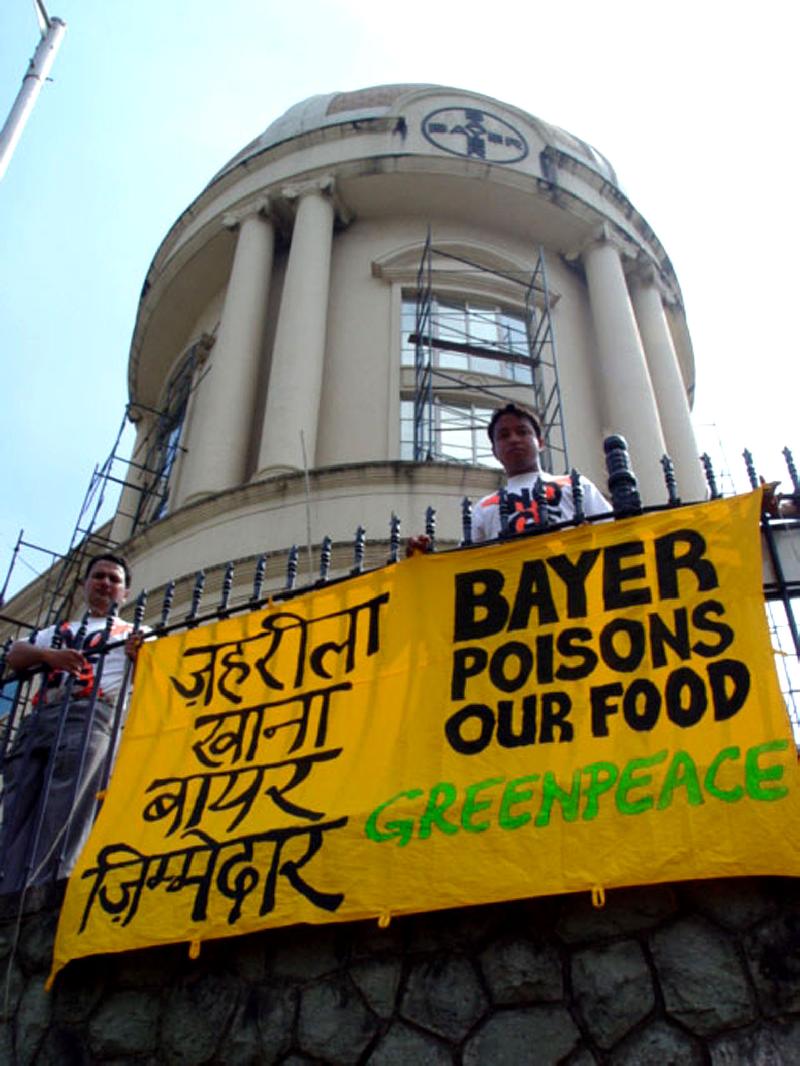 Mumbai: Six Greenpeace activists are chained to the Mumbai headquarters of Bayer Crop Science right now, with banners proclaiming 'Bayer poisons our food'. The activists are there to bear witness to and expose the high-risk genetic experiments conducted by the company on popular food crops including cabbage and cauliflower.

Bayer is one of the leading agro-chemical companies of the world, holding nearly one-fourth of the market share in the Indian pesticides industry (22%) with 52 products including formulations.

"The Department of Biotechnology (DBT) has disclosed that Pro Agro (a wholly owned subsidiary of Bayer) has conducted field trials of cabbage and cauliflower genetically modified with the controversial Cry9C gene," asserted Divya Raghunandan, GE Campaigner, Greenpeace India, "Considering the high risks to human health associated with this particular gene (See footnote 1), Greenpeace is concerned about the implications for consumers, including the farmers that will grow these crops, and we are demanding that the company stop all research using the Cry9C gene and makes all information related to these field trials open to public scrutiny."

"The Cry9C gene protein is notorious for being a suspected human allergen. The United States Environmental Protection Agency acknowledged this risk and refused to certify a version of corn genetically modified with this gene as fit for human consumption. This Cry9C-laced corn, interestingly, was also owned by a subsidiary of Bayer Crop Science, Aventis, and was eventually marketed under the brand name StarLink for animal feed and industrial purposes. However in September 2000, StarLink was found in corn taco shells and other foods and about 300 corn products had to be withdrawn from the market.

"Cry9C also made an appearance on the Indian scenario in March 2003, when a food aid shipment from two US-based aid agencies (CARE and Catholic Relief Services) was suspected of being contaminated with StarLink corn. Responding to the warnings issued by the Indian Council of Medical Research, and an alert sounded by concerned organizations, the Genetic Engineering Approval Committee (GEAC) took a stand against the shipment, and demanded that USA and the aid agencies provide certification for each consignment of corn-soya blend that it did NOT contain StarLink. Since none of the agencies were willing to certify this, the entire shipment was rejected outright.

Greenpeace is demanding that Bayer answers critical questions on their genetic field trials, including:
1. Why is Bayer using the same gene implicated in the Starlink to feed people in India?
2. What bio-safety and health safety assessments, if any, have been conducted and what were the results of the same?
3. What did Bayer do with the GM plants, seeds and produce from these field trials?
How can they assure us that these have not already entered the food chain?

Foot note 1: Cry9C is one of a family of crystalline (Cry) endotoxin proteins produced by Bacillusthuringiensis (Bt), a naturally-occurring soil bacterium. The Cry endotoxin disrupts the digestive systems of pests attacking GM crops and kills them. Unlike other Cry proteins, Cry9C is heat-stabile and also resistant to degradation in gastric juices. These two properties are generally considered the most important indicators

Mumbai 1 October 2004: 11 hours after six Greenpeace activists chained themselves to the gates of Bayer Crop Science headquarters in Mumbai yesterday, demanding information on Bayers recent dangerous experiments with the infamous CRY 9C gene on popular food crops like cabbage and cauliflower, the company responded with a statement that contradicts itself even as it spins further untruths.

“The Department of Biotechnology (DBT) has published an article in Current Science , stating that Pro Agro (a wholly owned subsidiary of Bayer) has conducted field trials of cabbage and cauliflower genetically modified with the Cry9C gene , a potential human allergen said Divya Raghunandan, Greenpeace campaigner “We are concerned about the implications of these dangerous trials on consumers and farmers who will grow these crops, and Greenpeace is demanding that the company immediately stop all trials and make all information related to any past trials open to public scrutiny.
“The apathy and indifference of this company is unbelievable! said Divya Raghunandan, GE Campaigner, Greenpeace India, “They took 11 hours to eventually respond with half-truths and a logically inconsistent statement. This statement only vindicates our stand that we are dealing with an irresponsible corporation with many skeletons to hide.
The official response from Bayer first states that “it has never done trials involving Cry9C then states “These trials were conducted in a contained environment and were harvested well before flowering.

The activists, who had earlier unfurled banners proclaiming Bayer poisons our food eventually unchained themselves after securing an appointment for Wednesday 6th October, a written statement of the companys stand, and an assurance that their questions would be answered. Although they ended the protest, they did so only after unfurling another banner stating Bayer is a Liar, in response to the statement issued by the company.
This Cry9C-laced corn, interestingly, was owned by Aventis Crop Science (later acquired by Bayer), who marketed it under the brand name StarLink for animal feed and industrial purposes. However in September 2000, StarLink was found in corn taco shells and other foods and the company was forced withdraw all products around the world from the markets .
“Bayer is a repeat offender as far as poisoning our food goes, said Doreen Stabinsky, Scientific Advisor, Greenpeace International, “Greenpeace has already exposed their double standards with relation to the production and sale of Class I pesticides that they have discontinued in their home country; Bayer is again trying to poison Indians, by using a gene thats been shown to be unsafe in the rest of the world and banned in the US for human consumption.