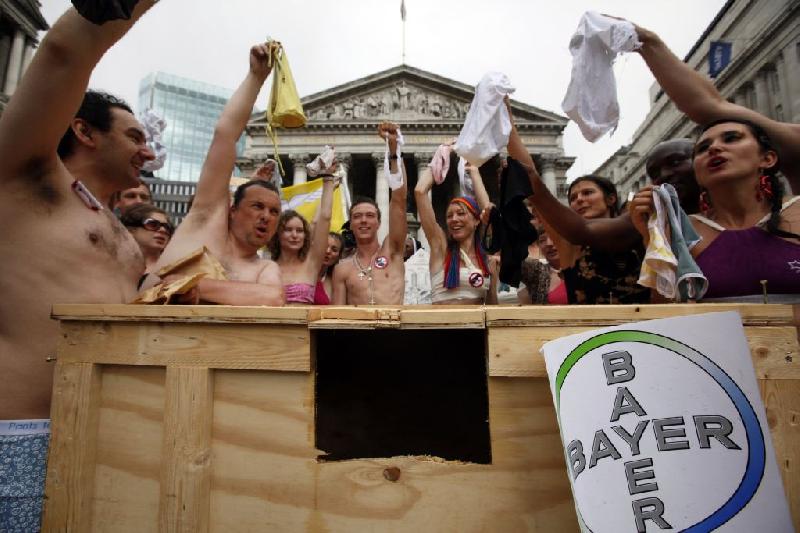 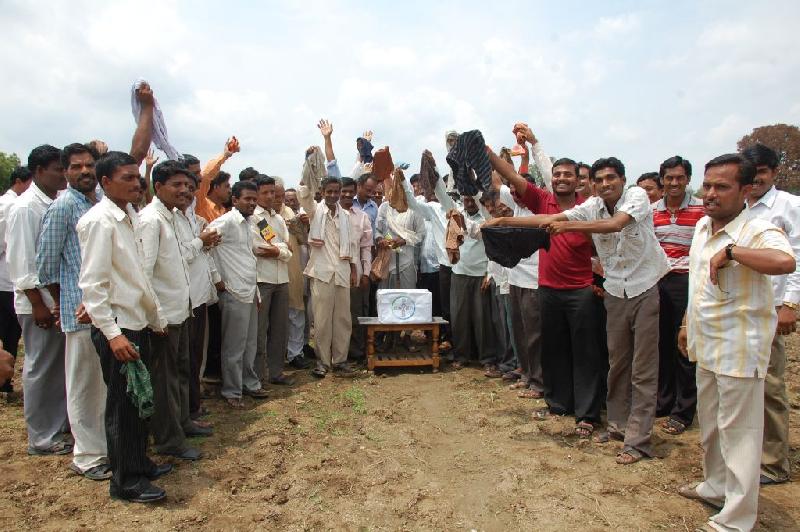 Pants to Poverty raises awareness of how endosulfan – a pesticide which is banned in the EU – harms farmers who supply cotton to make clothing
At 1pm today, people in London and 15 countries worldwide swapped their old y-fronts, knickers and boxers for a free pair of organic cotton pants. But why the mass undies amnesty? Campaigners including Sam Roddick, the Pesticide Action Network, Environmental Justice Foundation (EJF) and Pants to Poverty are calling on punters to swap non-organic cotton pants for organic ones, in a bid to reduce pesticide use.
The campaigners have a particular beef with endosulfan, a pesticide that's banned in the EU, and which they claim can be found in trace elements in 8.68m "toxic pants" in the UK. That number comes from a new test of 1,000 pants by the lab Eclipse Scientific, which found traces of endosulfan in 1 in 50 pairs. For UK consumers, the levels of endosulfan finding their way into your underwear pose little danger to your intimate parts.
The real danger is for the farmers directly exposed to the pesticides used in cotton farming – the EJF claims 20,000 agricultural workers are killed annually because of exposure to pesticides. Dr Mohana Kumar, chief doctor for the Padre district in India, has been compiling records of patients in his region showing symptoms that match endosulfan poisoning. Acute endosulfan poisoning can cause convulsions, psychiatric disturbances, epilepsy, paralysis, brain oedema, impaired memory and death. Long-term exposure is linked to immuno suppression, neurological disorders, congenital birth defects, chromosomal abnormalities, mental retardation, impaired learning and memory loss. Kumar says the "proof against endosulfan is comprehensive". Endosulfan isn't just bad news for people, as the US Environmental Protection Agency links it to "adverse effects" on the physical environment and wildlife.
There are alternatives to using endosulfan as a pesticide for cotton – not just organic farming methods, but newer safer pesticides. The pants amnesty is calling on people to lobby Bayer Group, one of the biggest producers of endosulfan, to use such alternatives. Its preferred lobbying method is literally pants: it wants you to post your oldest pants to your local Bayer office, and ask them to drop endosulfan.

Core Facts
· Disenchanted nation: a staggering 64 percent of the population believe corporations, not governments, have the ability to solve world poverty
· People Power: on the eve of the G8 Summit, thousands of people across 16 countries participated in the Worlds Biggest Bad Pants Amnesty to demand an end to unethical pant production
· Bayer Group: consumers send their worst pair of pants to the Bayer Group - the last remaining pharmaceutical brand selling toxic pesticides such as endosulfan to the developing world
· Indian superstars: Vandana Shiva, Kabir and Pooja Bedi join thousands of farmers and factory workers to lobby the Indian government to stop production of endosulfan
· Mr Pants Man: aka Philip Taylor from The Apprentice launches the Campaign against bad pants in the UK
On the eve of the G8 Summit, PantstoPoverty, the award-winning Fairtrade underwear brand, united thousands of consumers, farmers and factory workers across 16 countries to demand an end to unethical pant production at the worlds biggest pants amnesty.
Sales of unethical pants are physically mutilating cotton farmers in the developing world – countries ranging India, Vietnam, Benin, Togo, Argentina and Tanzania - and causing catastrophic harm to them, their families, and the environment.
One pair of non-organic cotton pants will have used 10ml of pesticides, which in the case of endosulfan is enough to kill a person, if directly exposed.
The World Health Organisation estimates the number of people who are poisoned annually at three to 25 million. Two hundred thousand people commit suicide using pesticides and more than 40,000 people are killed accidentally by pesticides every year. The estimated number of unreported cases is much higher. These pesticides contribute enormously to the thousands of deaths and millions of pesticide poisonings each year. Side effects include cancer, birth defects, respiratory problems and sterility(1).
To rescue these people and the environment, PantsToPoverty has entered into a coalition(2) to launch a challenge to the Bayer Group. Bayer is the last remaining major pharmaceutical brand distributing toxic pesticides such as endosulfan, despite being banned in 62 countries including the European Union.

Worlds Biggest Pants Amnesty
A new YouGov survey shows that UK citizens have no faith in governments to make any sort of meaningful change. Two-thirds (64%) believe that businesses can do more to bring about positive change(3).
As a result, this campaign across 16 countries that begun with worlds biggest pants amnesty, will continue to mobilize producers, consumers and celebrities to publicly target the Bayer Group by sending their worst pair of bad pants to their local BAYER office with the campaign demand attached.
In India – across Maharastra, Andhra Pradesh, Madhya Pradesh and Kerala – thousands of farmers and factory workers united with Bollywood legends to tackle this greedy organisation and apply pressure on the Indian government to cease production.
Data available from Ministry of Commerce, Government of India shows that India exported 20,735 MT of endosulfan to more than 70 countries across all continents in the world in the last five years, with a value of USD 87.5 million.
In the UK Mr Pants Man himself, aka Philip Taylor from The Apprentice, will lead this movement. He will be joined by hundreds of consumers to raise awareness of unethical pant production and the detrimental effect its has on communities involved in its supply chain.
Advertising supreme Leo Burnett has created a mockumentary about the Panteater, a mutated anteater that feeds on unethical pants, to explain these serious issues in a consumer-friendly way using pants as the metaphor.

Quotes
"Ban endosulfan in Indian cotton cultivation, as they have in 60 other countries. It has caused genetic mutations and sterility in many farming communities. Let's end the exploitation of poor farmers in India and promote organic farming. Cotton in India uses 55% of all agricultural pesticide though cotton is only 5% of India's total cropland. The hazards of endosulfan far outweigh its uses. I wholeheartedly support this farmers movement to reclaim their lives and lands through the use of organic farming, which is also proven to be three times more profitable" said Kabir Bedi.
“It is a tragedy that the only government in the world that itself manufactures endosulfan can, in what is a clear conflict of interest, utilize the consensus requirements of UN conventions to block global agreements on the chemical, said Dr Meriel Watts of Pesticide Action Network Aotearoa New Zealand.
Ben Ramsden, founder of Pants To Poverty said: “Our world is facing major social, financial and environmental challenges that we must face up to rather than ignore. Using pants as our metaphor, this campaign explains both the good and the bad about the cotton industry and points towards a brighter future. Organic and Fairtrade farming is a great solution to a horrible problem. We must rise up and let its greatness blossom
“If Bayer were to stop selling endosulfan, it would send a clear signal to the very small number of countries, including India, which still oppose the chemical being restricted in the Stockholm and Rotterdam Conventions, that endosulfan is yesterdays pesticide. Why should Bayer sell a pesticide banned in its own country to poor farmers in the developing world? concludes Linda Craig, Director of Pesticide Action Network UK.
Philipp Mimkes from the Coalition against Bayer Dangers, which has been monitoring the corporation for more than 25 years, said: “In 1996 Bayer promised to replace all WHO Class I pesticides with products of less toxicity. Thirteen years later they seem to have forgotten about this promise and these dangerous products are still on the market. As a result thousands of agricultural workers across the world are poisoned year after year.
Chief Doctor, Dr Mohan Kumar said: “The proof against endosulfan is comprehensive. With this new research we can finally prove that replacing it not only dramatically improves peoples health, but also enables farmers to earn more money and support their communities.

Boilerplate Statements
· http://www.ejfoundation.org/page241.html
· In its business report of 1995 Bayer pledged to stop the sale of all pesticides of the hazard category 1a and 1b (these are pesticides that are classed as the most hazardous pesticides to human and environmental safety and are banned in many wealthy countries). Fourteen years later they remain on the market.(4)
· Endosulfan has been recommended by the Chemical Review Committee of the Rotterdam Convention for addition to the Prior Informed Consent list.
· It has also been judged by the POPS Review Committee of the Stockholm Convention to meet the criteria for a Persistent Organic Pollutant, and is currently undergoing assessment by the Committee prior to listing.
Listing under these conventions is only possible when a significant number of countries have banned the chemical, and the Conferences of Parties have agreed to the listing. In 2008, a very small number of countries blocked the listing on the Rotterdam Convention, and are likely to do the same at the Stockholm Convention Meeting in 2011.