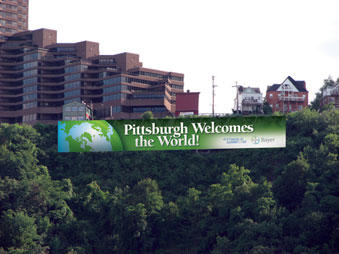 On the occasion of the G-20 summit held in Pittsburgh 24-25 September, Bayer Corporation is trying to present itself as a green company and a responsible corporate citizen. Throughout the city Bayer put up huge welcome banners which include the Bayer and official Pittsburgh Summit 2009 logos. The company also set up the special website www.bayerG20pittsburgh.com. Bayer´s US headquarters are located at Pittsburgh.

Philipp Mimkes of the Coalition against Bayer Dangers, based in Germany, comments: “Bayer´s G-20 presentation is a typical example of corporate greenwash. The company is still selling highly toxic pesticides which lead to poisonings and environmental damage throughout the world. Recently obtained internal documents show that after a huge explosion in their Institute plant Bayer tried to hide inconvenient facts and wanted to “marginalize their critics. And at several Bayer sites coal-fired power plants with millions of tons of CO2 emissions are being built. This record is quite the opposite of the company´s alleged responsible behaviour. The Coalition demands that the G-20 implement effective measures to limit corporate power and to drastically reduce hazardous emissions.

Axel Koehler-Schnura, founder of the Coalition against Bayer Dangers, adds: “Thirty years of confronting this influential company have shown us that big corporations put profits before people - even when human lives and the environment are endangered. The global financial crisis shows that multinational companies need to be controlled consistently and independently.

Bayer has fought against almost all agreements on environmental issues, be it the Kyoto Protocol for the protection of the climate, the new European laws on chemicals, the phasing out of CFCs or efforts to reduce the use of pesticides. Some other recent problems linked with Bayer:

· The company participates systematically in illegal collusion on prices. In 2008 Bayer paid a fine of $97.5 million for bribing distributors of monitoring devices for diabetes patients to offer only Bayer products.
· Bayer endangers patients through dishonest advertising statements for pharmaceutical products. Recently Bayer received FDA warnings over its advertising for two Aspirin combination products and for their contraceptive pill Yaz.
· The herbicide glufosinate is toxic to reproduction and can cause deformities in fetuses. The ingredient belongs to a group of pesticides that must disappear from the market under the new European pesticide legislation. Despite the proven risks Bayer has increased production of this herbicide.
· Bayer is marketing dangerous pesticides and is hereby accepting the mass death of bees. In May 2008 Bayer´s clothianidin caused the deaths of millions of honeybees in Germany. German authorities banned the product afterwards. The French government rejected Bayer´s application for Clothianidin right away.
Bayer is a member of hundreds of lobby groups tackling environmental, health & safety laws such as the European Round Table of Industrialists, the Transatlantic Business Dialogue, the World Business Council for Sustainable Development, the International Chamber of Commerce and CropLife.

The Coalition against Bayer Dangers has been monitoring Bayer for more than 30 years and is working on a broad range of issues, such as the emissions of Bayer plants, hazards caused by Bayer products, and accidents in Bayer plants. According to the Coalition, multinational companies are clearly responsible for ecological, social, and political problems all over the world.