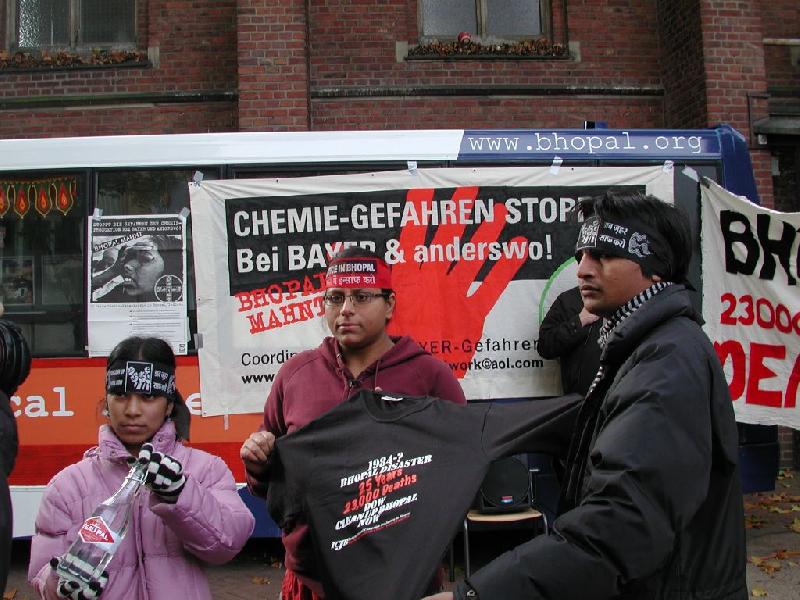 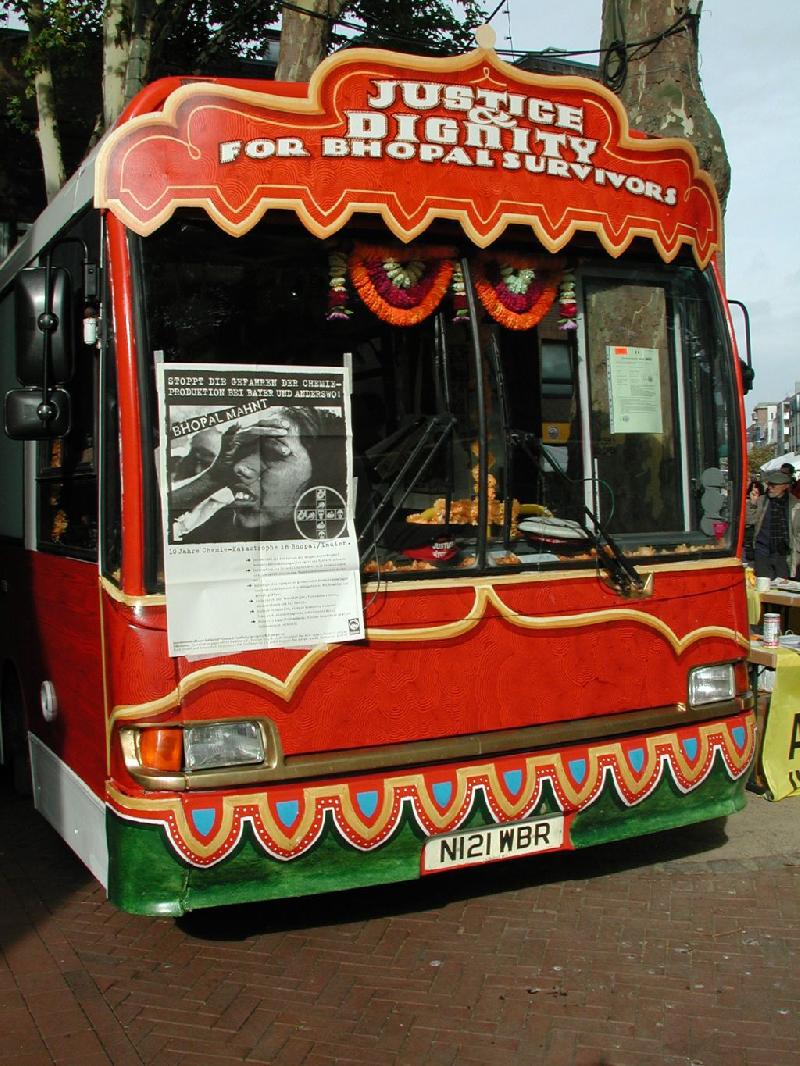 Bhopal 25 years later: “A story of corporate greed and profit

Rachna Dhingra, 32, originally from Delhi, was just six years old when the world's worst industrial disaster struck Bhopal in 1984. She studied in the US and joined a student group that took up the issue of the Bhopal gas disaster. Rachna graduated with a business degree in 2000 and went to live in Bhopal in January 2003. She is now an important force in the international campaign and locally with the Bhopal Group of Information and Action. Before returning to India she was associated with Dow Chemical, the parent company of Union Carbide Corporation. We met her at Leverkusen/Germany, home of Bayer Corporations´s global headquarters.

Rachna, what´s your personal motivation to engage in the International Campaign for Justice in Bhopal?
I love what I am doing. For me it is not a sacrifice but something that helps me sleep better at night without any regret. What angers me most is that even 25 years after the disaster, the government can allow people to drink contaminated water. Every person is moved by something in his or her life. For me it was the fact that the company I was working for was more concerned about profits than lives of the people. I came to Bhopal to work with the survivors who have been fighting for better health care, clean drinking water and prosecution of individuals and corporations responsible for the disaster. A quarter of a century is a long time to wait for justice but I am hopeful that eventually everyone will get justice.

Why have you decided to get on this bus tour on the 25 anniversary of the Bhopal blast?
To tell people that this is not a disaster that happened 25 years ago, but it continues to happen today. To raise awarenes among people in Europe that the story of Bhopal is not just about Bhopal, but it is a story of corporate greed and profit who put profit before human lives & environment. The bus tour is a easy way to travel across several countries, stop in small places and make connections with other communities who are fighting similar battles. This bus tour is also to raise awareness and funding for Sambhavna clinic, which provides free and best medical care to people poisoned by Union Carbide. For more information or to donate, pls visit www.bhopal.org.

Last year you also passed by the Bayer plant at Institute/USA, the "sister plant" of Bhopal, where in 2008 a huge explosion took place. How were the reactions to your appearance at Institute?
This was one of the few places in our US tour where we connected to another affected community. It was very emotional and shocking to see that no lessons had been learnt from the Bhopal disaster. All of us were extremely saddened to see the proximity of the factory to the residential communities. As soon as one enters the town, the smell of toxic chemicals engulfs you and it stays with you until you leave the town. After talking to lot of people of community, I was shocked to see the similarities of diseases that women and young children were suffering from the slow poisoning caused by the Bayer Plant. As in Bhopal people are sick in Institute. No significant study on the water pollution, morbidity, cancer rates etc has been carried out by the scientific agencies. Just like in Bhopal it was poor and people of color who are suffering the most at Institute

Why did you visit Leverkusen, home of Bayer´s global headquarters?
One of our main reasons to come to Leverkusen was to tell the people living in Leverkusen and Bayer's factory workers the kind of crimes Bayer is committing in other countries. We want people in Leverkusen to know that NO MORE BHOPALS should ever be anywhere and no one should suffer like people in Bhopal and Institute are suffering.

What are the worst problems today in Bhopal and what are the most important demands?
In this 25th year of unending human suffering over 25.000 people have died. Each one of the half million exposed and their children have lost a relative, a friend or a neighbour. One fifth of the over half million people exposed remain chronically ill from a range of physical and mental diseases from toxic exposure. Tens of thousands of children born after the disaster have growth and development disorders, hundreds of children are born with birth defects stemming from their parents exposure to Carbide's poisons through gas or through ground water contaminated by chemical wastes from the factory.

In this 25th year of corporate crime: the worst corporate massacre in world history, the individual officials and the corporations charged with manslaughter, grievous assault and other criminal charges remain absconding from Indian courts, unpunished. Meanwhile the principal accused continues to do business in India through The Dow Chemical Company that currently owns it. The request for extradition of Warren Anderson, former Chairman and principal accused in the criminal case lies denied by the US State and Justice Departments.

In this 25th year of governments in bed with corporations: more than 17 years have passed and the prosecution remains to seek the extradition of representatives of Union Carbide now an US based company absconding from Indian Courts. The government has failed to file charges of bribery, a punishable offence, against Dow Chemical that has admitted to paying thousands of dollars in bribe to Indian government officials for registration of pesticides. The government has played an active role in helping Union Carbide sell its technology and services in India while absconding from Indian courts.

In this 25th year of anti people governments: despite the changes in the political parties that have come to power state and central governments have remained unchangingly apathetic towards the social and economic problems of tens of thousands of survivors who lost their capacity to earn a livelihood. The un-stated Government policy of treating Bhopali lives as expendable is apparent from the consistent and deliberate neglect of the rehabilitation of the survivors and their children. The Empowered Commission for long term rehabilitation of the survivors remains to be set up despite nine month old public promises.

An global environmental crime ongoing for over 25 years: ground water and soil in an area over 20 square kilometres lies contaminated with cancer and birth defect causing chemicals and chemicals that damage the lungs, liver, kidneys and brain. Some of these chemicals have been found in the breast milk of mothers in the communities next to the factory and the dump where over 10, 000 tonnes of hazardous waste lies buried. The area includes the 87 acre factory premises where Union Carbide admits to dumping hazardous wastes in over 20 spots. Union Carbide ignores notices from the Indian courts and Dow Chemical says it can not accept liabilities of accompany that it owns 100%.

In this 25th year of slow and silent Bhopals: corporations big and small worldwide emboldened by the absence of justice in Bhopal continue with toxic trespass into peoples habitats and their bodies and those of the unborn. Globalization gas given a boost to the spread of the toxic empire as the logic of profit over peoples lives and those of the unborn finds newer areas to capture. Across national boundaries regulatory authorities

What has to be done to prevent further catastrophes like the one in Bhopal?
Corporations and individuals who commit such crimes have to be punished appropriately. They have to be treated like criminals so that death by their poisons is recognized as homicide, assault of their poisons on women's body should constitute as rape, causing birth defect in children due to exposure of such chemicals should constitute as criminal offences. Unless we can reverse the precedent that corporations cannot come into a place then kill, pollute, injure and leave without any criminal liability then we have very little chances of preventing Bhopal like catastrophes. The Precautionary Principle should also be followed and looked into. We need to question why production of such toxic and hazardous chemicals is needed where there are inherent dangers to human life and the environment.