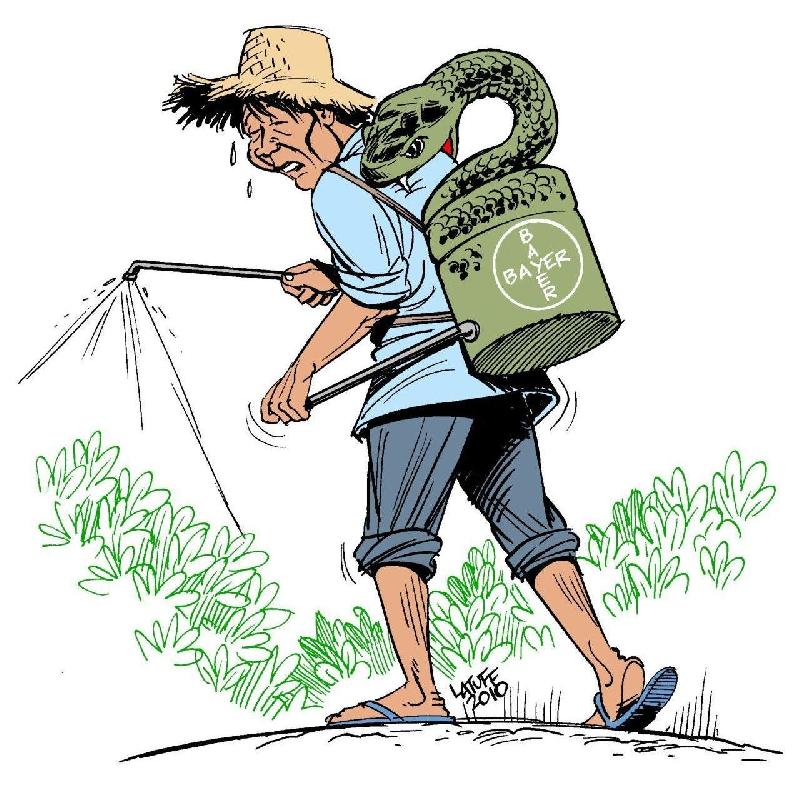 The Coalition against Bayer Dangers, based in Germany, urges the multinational company Bayer to withdraw their most dangerous pesticides from the world market. The network particularly calls on Bayer to quit sales of all products which contain active ingredients in Class 1 of the World Health Organisation (WHO) classification of pesticides.

Bayer is the world market leader for pesticides, many of which account for pollution and poisonings all over the world. The company acknowledges that “crop protection products may not always be used correctly under certain circumstances in some Third World countries. Already in its 1995 Annual Report Bayer promised to “replace products with the Classification 1 of the World Health Organisation with products of lower toxicity.

A safe use of class 1 pesticides is not possible - especially in countries of the South - because of poverty, illiteracy and other social conditions as well as tropical climatic conditions which do not permit the wearing of protective gear. The WHO estimates the number of people who are poisoned annually at three to 25 million. At least 40,000 people are killed accidentally by pesticides every year. The estimated number of unreported cases is much higher. Bayer pesticides contribute enormously to the thousands of deaths and millions of pesticide poisonings each year.

Nevertheless the company failed to keep its promise. Bayer still sells products that contain active ingredients in WHO Class 1a (extremely hazardous) and 1b (highly hazardous), including Thiodicarb, Disulfoton, Triazophos, Fenamiphos and Methamidophos.

Under strong public pressure Bayer pulled several class 1 products from the market. These included methyl and ethyl parathion, monocrothophos, oxydemeton-methyl, azinphos-methyl, amitraz and trichlorphon. Only six months ago Bayer committed to end the distribution of the pesticide endosulfan by the end of 2010. The decision came after years of global campaigning against this persistent pesticide, which is linked to autism, birth defects and male reproductive harm, as well as deaths and acute injuries to farmers through direct contact. Fatalities could be reduced significantly by the cessation of the sale of ALL class I substances.

The Coalition against Bayer Dangers also demands an immediate ban on the herbicide glufosinate and a suspension of all approvals of glufosinate-resistant crops. A European Food Safety Authority evaluation states that glufosinate poses a high risk to mammals. The substance is classified as reprotoxic, with laboratory experiments causing premature birth, intra-uterine death and abortions in rats. The European Parliament voted last year to ban pesticides classified as carcinogenic, mutagenic or toxic to reproduction. Permits for 22 substances, among them glufosinate, will not be renewed.