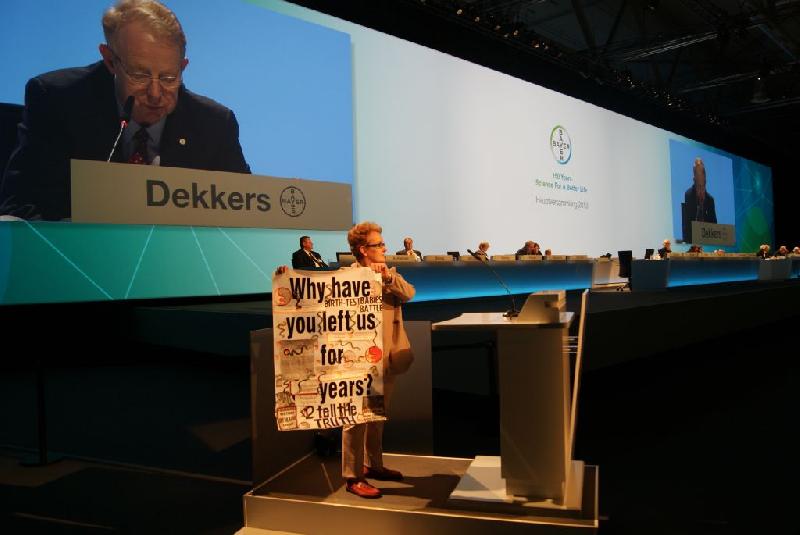 Good afternoon. My name is Valerie Williams and I speak on behalf of the victims of the Association for Children Damaged by Hormone Pregnancy Testing in the UK. I also speak as a mother of a Primodos/Duogynon victim, a drug which has had a tremendous impact on thousands of lives across the globe, the wildlife, and environment.

I speak today of a tragedy, of appalling injuries to victims due to poisonous chemicals in Primodos/Duogynon. When Primodos was launched in the fifties, your implicit instructions stated Primodos would not harm our babies.

Since then much research has been revealed to expose your integrity as a reputable company of drugs, which has gone to great lengths to conceal the shattering impact which your drug Primodos/Duogynon had on the foetus.

I ask you: “Why did you, in your pursuit to capture the world market of the Oral Contraceptive Pill, using power in your creation of oestrogen dominance, decide to use the same chemical components in the Pill and Primodos, and thus for two different indications?

Can you verify that both Primodos and the Pill were both tested fully as safe to use, over fifty years ago?

How many millions of women in the world today believe that taking the pill as a contraceptive method is safe to use when there is – since 1986 – confirmed evidence to suggest that Dr Briggs, your Chief Medical Officer in your subsidiary in the UK deliberately forged his own research studies. Professor Briggs as he was known up until 2012, confessed to a reputable journalist – Brian Deer – his deceit to cover up on falsified studies on both the Pill and Primodos/Duogynon two months before he died in 2012.

Can you confirm that it is true that the Chief Medical Officer at The Committee on Safety of Medicines in the UK, Dr William Inman, wrote a supplementary report to support yourselves as one of your expert witnesses, prior to the trial in the eighties, and if so, did Dr Inman gain financially for his services?

I would like to ask you if it is true that Primodos/Duogynon was one of your hormone products researched as experiments on prisoners, in this case on women, at Auschwitz, whilst Bayer was a part of the IG Farben during World War II.

I want to repeat myself: When Primodos/Duogynon was launched in the fifties, your implicit instructions stated it would not harm our unborn babies. Why have you been denying since the seventies consistently that Primodos/Duogynon was not responsible for the harm to our babies? We now have sufficient information to the contrary to state chemicals in Primodos/Duogynon were used to abort, to kill, and impair the foetus.

Like thousands of mothers, in the singularity of the moment when I was prescribed Primodos/Duogynon as a pregnancy test in 1974, I was not to know that a line was to score across the lives of our unborn babies, a line so deep causing horrific injuries to their innocent bodies due to coming into contact with synthetic oestrogens without adequate testing.

The victims of Primodos/Duogynon did not choose their paths; their paths were forced, and chosen upon them with horrifying consequences by Primodos/Duogynon. In the UK, a mother was found guilty, and jailed in 2012 for knowingly taking drugs to abort her unborn baby at eight months gestation. Bayer Schering have never been prosecuted YET, despite your own Medical Director, Dr Briggs in the UK, pleading with you to withdraw
Primodos/Duogynon, due to doubts on its security.

Do you deny that your own research studies on rats for research on the safety of Primodos/Duogynon in 1961 revealed a high incidence of abortions in rats, and why did it then take until 1969 before you issued a warning notice to stop doctors from deciding unknowingly the fate of unborn babies as a result of prescribing Primodos/Duogynon as a pregnancy test? I have a copy of this research study here today verifying this warning.

Why did you not take precautionary steps like your rival, Roussel Pharmaceutical in France, who removed their hormone pregnancy test, Ammenore Forte, from the market immediately in 1969, when they heard of your warning.

Is it your strategy to wait for victims of Primodos/Duogynon to die, being tantamount to defiling justice to innocent victims enabling their rightly so just compensation?

Are you aware that the British Medical Journal, set up as early as in 1950 to evaluate the effects of large doses of Stilboestrol and Eithisterone on rates of foetal loss in pregnant women, found in 1980 that more tumours, mainly benign tumours of the reproductive tract were reported in the hormone exposed than the non-exposed group. Furthermore, four cases of malignant breast cancer were reported in the hormone exposed women.

In 2010, Mike OBrien - then a Junior Health Minister - told the House of Commons that British Regulatory agencies had received 3,500 reports over the years of adverse reactions related to the drugs Norethisterone and Ethinylestradiol, components of Primodos/Duogynon and the Pill. Three reports of adverse reaction specifically cited Primodos.

Did you as a pharmaceutical company and manufacturer of Primodos/Duogynon realize that this drug has not only caused great harm to our unborn babies, but on a much wider scale has polluted extensively our waterways throughout the world? I ask you: To what extent are you prepared to take to reverse the trend of damage to man, and our planet with your products, by becoming a much greener drug company with a more humane and ecological conscience?

Are you aware of the concerns of the European Commission who has provided 7 billion Euros for Cambridge Scientists in the UK, to investigate the potential impact of chemicals in our environment since 2001?

I ask as a campaigner against some of your chemicals and I ask you in the name of science and humanity: Please listen to those who are knowledgeable professionals on the subject of the worldwide chemical threat to our environment and on the long term devastation to our planet, as it has taken place during the past fifty years?

I ask you as shareholders to consider the catastrophic changes in our waterways, which will have grave repercussions for future generations in man, environment, and our wildlife, as a direct cause of the use of Primodos/Duogynon and the oral contraceptive pill. The 2011 Report on Carcinogens (12th edition) cites a study conducted to determine the presence of hormones in environmental water samples, which detected Norethisterone in 8% of US sewage water supplies.

The British Agriculture Minister already knew some years ago of Norethisterone findings in UK waterways producing hermaphrodite fish, but kept quiet for two years before revealing the findings on wildlife. Exposure to colossal amounts of artificial female hormones can only contribute to an intersexed generation of people/wildlife.

You have heard the realism of evidence against synthetic oestrogens, and in your positions as shareholders, you now have the authority to bring pressure on Bayer, if only to prevent further damage to your future generations of children.

Finally, I want to record that it is wrong to say that the victims of Primodos/Duogynon, especially the ones who were selected randomly during the initial phase and were forced to take Primodos/Duogynon with the consequence of abortion, death, and horrifying injuries, were not pawns for Bayer Schering. Today, there is no greater challenge for the victims than to challenge their greatest evil, Bayer Schering to admit they were wrong to use Primodos as a pregnancy test and to challenge the perpetrators in the British Government who betrayed them rather than give support.

Those that survived this horror drug were born to go forth with strength and courage, to question the law of justice which they have been denied so far by corruption and deceit. Free in their own destiny to face those that robbed them of a life from disabilities, as they continue to be subjected to a battery of tests and check ups throughout their lives. There is one piercing question which remains unanswered: “Will Primodos continue to be a threat with unknown side affects to victims and their mothers, due to insufficient research fifty years ago?

Thank you for listening to what is destined to be the biggest medical and legal fraud of the twenty first century.