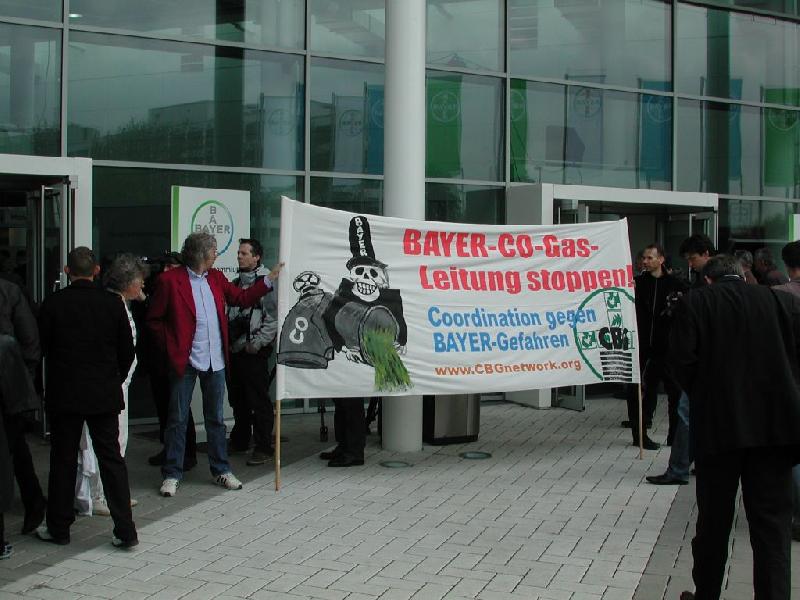 “Toxic gases must be kept out of housing areas”

The chemical and pharmaceutical enterprise BAYER plans to transport poisonous carbon monoxide gas through densely populated areas. The act sets a dangerous precedent. So far toxic substances have not been transported by pipeline. The project is highly disputed in Germany.

The company BAYER has built a 67 km-long carbon monoxide (CO) pipeline to connect the factories at the towns of Dormagen and Krefeld. Carbon monoxide is highly toxic. The inhalation of a few hundred millilitres can be fatal. German authorities admit that "there are no detailed reports of experience with carbon monoxide pipelines because there are hardly any such pipelines anywhere in the world."

Pipeline experts suggest that the risk of a gas escape can be reduced by technical measures, but cannot be entirely eliminated. Damage including the rupture of the pipeline by an earthquake, construction activities, a plane crash, unexploded munitions left over from the Second World War or a terrorist attack cannot be ruled out. An expert's report commissioned by the neighbouring district of Mettmann concluded that in the event of an accident, more than 140,000 residents would be in acute danger.

The police, fire department and medical services have stated that in the event of an accident they cannot guarantee the safety of the population. All of the affected municipalities are therefore opposing the pipeline. More than 120,000 people have signed protest petitions.

Philipp Mimkes from the Coalition against Bayer Dangers says: “Toxic gases such as chlorine, CO or phosgene must be produced - if at all - decentrally in well-protected plants and must be processed on site. The transport of such hazardous materials should not take place. It is irresponsible to expose the population to this unnecessary risk.” The Coalition introduced a countermotion to the upcoming BAYER shareholder meeting and will discuss the issue within the venue on April 29. According to the Coalition, the BAYER Board should not be reelected due to its support of this controversial project.

In the pipeline permit, the risks to the population and the necessary expropriations were justified as "beneficial to the public interest". In fact, there are no such benefits for the public. The purpose of the pipeline is to make better use of the existing capacities in Dormagen and Krefeld. But lower costs for a company - which are questionable in the first place - have nothing to do with the public interest. The expropriations are therefore illegal. The Administrative Appeals Tribunal (Oberverwaltungsgericht) at Muenster expressed similar objections as long ago as December 2007, which is why the pipeline, which has already been built, does not yet have an operating permit.

The excess CO in Dormagen that BAYER originally claimed to exist is no longer an issue. On the contrary: the erection of the new TDI plant in Dormagen means that another steam reformer for CO production must be built there. However, the new CO production plant could also be built in Krefeld, in which case there would be no need for the pipeline. This was also the conclusion of the most recent report from the state government, which determined that there was no need to build the pipeline. According to the survey, there are several options for a decentralized CO production that would even be cheaper.

BAYER's repeated assertions that "pipelines are the best means of transport in terms of safety and environmental aspects" are misleading. These statements imply that the pipeline would replace other means of transport, e.g. by ship or truck. In fact, CO is not transported in significant quantities because of stringent and expensive safety requirements.

The accident in the BAYER Brunsbuettel plant on September 25, 2013, shows how dangerous the handling of carbon monoxide is. According to police reports, the accident left two employees in critical condition. Handling CO is extremely dangerous, even in well-protected plants with skilled employees. That makes it all the more important to prevent transport through unprotected areas.

Between BAYER`s Dormagen and Leverkusen plants a 10 km CO pipeline is already in operation. This facility is particularly questionable: in 2001, BAYER repurposed a CO2 pipeline that had been built in the 1960s for the transport of carbon monoxide. There was no approval process in which the public participated. The effects of a CO leak were not investigated prior to the permit. Only one of BAYER's own experts discussed a worst case scenario, however, only in a total of exactly 9 lines. In the event of an accident, the expert spoke of a danger zone of 350 metres on both sides of the pipeline route. Hundreds of residents live in this distance. There was no specific investigation that took local conditions into consideration.

The Coalition against Bayer Dangers´ recent examination of the permitting documents uncovered serious problems, particularly in the section of the route under the Rhine river ("culverts"). For example, a survey from February 2013 identified "serious external losses of material", as a result of which the culverts were not "state of the art". The corrosion rate was estimated at up to 0.5 mm/year. In some spots, the corrosion was said to have advanced to the point where the "remaining useful life" was estimated at only 2 years. BAYER's protestations that the pipeline was built to the highest safety standards are therefore not very credible.