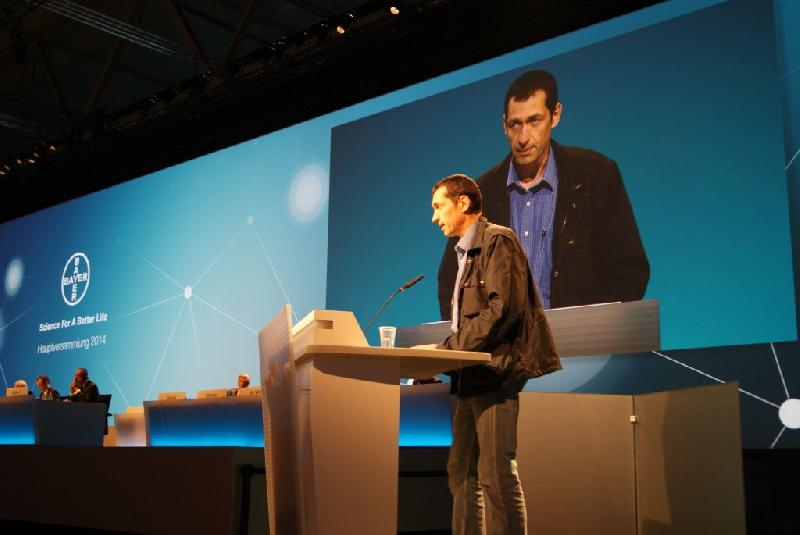 Brussels/Zurich, April 29, 2014 - A Europe-wide Alliance to Save the Bees and Agriculture today made themselves heard at the annual general meetings (AGMs) of Syngenta and Bayer to demand the agrochemical companies acknowledge their role in global bee-decline and step away from threatening EU-imposed legislation against neonicotinoid pesticides which harm bees.

Speaking at the Syngenta AGM, Francesco Panella, head of delegation and president of BeeLife European Beekeeping Coordination, said: “It is insulting how Syngenta, Bayer and BASF try to persuade beekeepers like ourselves that bee decline is caused by the Varroa mite or malnutrition or any other factor outside of their own responsibility. At the same time, they continue to sell bee-killing pesticides and attack EU provisions aimed at protecting bees. This is hypocritical, self-serving and short-sighted. It is time to switch from the current chemical-intensive agriculture paradigm to one which is compatible with biodiversity and beekeeping.”

At the Bayer AGM Roger Dammé, a beekeeper from Luxembourg and representative of Bee Life European Beekeeping Coordination, said: "Why using synthetic pesticides when it is not even known if the target pest is likely to occur in the field? Prophylactic - so called preventive treatments are a nonsense in agriculture. All it does is leading to higher pesticide use. The best way to protect bees and crops will always be to avoid the use of wide spectrum, systemic and persistent pesticides and look for solutions within the agro-ecosystem itself. "

Matthias Wüthrich, Ecological farming campaigner and European bees project leader at Greenpeace Switzerland, said: "People don't want chemicals on their plate and want healthy food that doesn't harm bees. Greenpeace and the alliance to save the bees are here to voice the concerns of the public: Bayer, Syngenta and BASF must withdraw their legal challenge against an EU-wide temporary ban of their bee-killing pesticides, re-think their chemical-intensive business model, and support a shift towards ecological agricultural practices".

In order to expose the toxic PR of the agrochemical companies aimed at defending their bee-killing agribusiness with exaggerated figures and scaremongering scenarios about the consequences of the neonicotinoid ban (including extreme yield-drops and unbearable job-losses in Europe), Greenpeace released the report “Corporate Science Fiction”, a critical assessment of Bayer and Syngenta’s way to influence the scientific, political and public debate on neonicotinoid pesticides. (3)

(1) The Alliance to Save the Bees and Agriculture consists of more than 50 European beekeeping and farmer associations, environmental and human rights organisations, consumers and slow food groups as well as independent research institutes (see http://publiceye.ch/en/about-the-pu...). It was founded for the nomination of Bayer, Syngenta, BASF for the public eye awards 2014 (see beekiller-case on http://publiceye.ch/en/case/syngent...).

(2) Ecological farming ensures healthy farming and healthy food for today and tomorrow, by protecting soil, water and climate, promotes biodiversity, and does not contaminate the environment with chemical inputs or genetically engineered organisms.