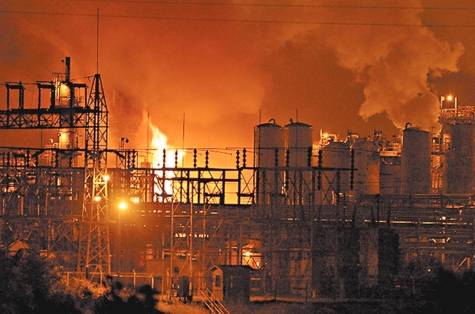 After a fatal explosion in its Institute/W.Va. plant BAYER lied to the public and concealed information from firefighters and authorities. A congressional investigation found that the explosion "came dangerously close" to compromising an MIC storage tank. Had the blast damaged the MIC tank, "the consequences could have eclipsed the 1984 disaster in India."

Bayer CropScience is selling its Institute chemical plant back to Union Carbide, which is now a part of Dow Chemical Co. The financial terms of the sale were not immediately disclosed.

Charleston Gazette, March 30, 2015 -- Bayer CropScience has “divested” itself of the Institute chemical plant site by selling the facility back to Union Carbide, the site’s former owner and now a part of Dow Chemical Co., the companies said Monday.

In a prepared statement, Bayer said there will be a “phased turnover” of plant activities, including utilities, emergency response and security, with full operation of the site by Dow’s Union Carbide unit expected by mid-2016. The transaction includes transfer of the land, as well as the majority of the site assets, Bayer said. Financial terms of the deal were not immediately disclosed.

Currently, Bayer operates one chemical production unit at the 450-acre site, and other companies — including Dow, Catalyst Refiners, Reagent Chemical and Praxair — operate separate units as tenants of Bayer. About 500 people work at the site, but only about 150 of those are employed directly by Bayer, said Bayer spokesman Greg Coffey.

Bayer’s current plant manager, Jim Covington, said that Bayer would “still have a presence” at Institute through the ongoing operation of its thiodicarb insecticide unit. “We expect some decline in Bayer employment at Institute over time,” Covington said. “However, retirements and voluntary separations should account for essentially all departures.”

Jamie Ellis, a media relations manager for Dow, said in a prepared statement that the deal with Bayer supports Dow’s “sustained focus on optimizing their resources and presence in West Virginia to create maximum value for the community, the companies, and their customers.” Dow currently employs 500 people across its operations in the Kanawha Valley, including at seven units it operates at the Institute plant, Ellis said.

Monday’s announcement came after a series of shakeups and downsizings at Bayer’s Institute facility that followed a major explosion and fire in August 2008 that killed two workers and prompted renewed attention on the company’s on-site huge stockpile of methyl isocyanate, or MIC, the chemical that killed thousands of people in a 1984 leak at a Carbide plant in Bhopal, India.

Plant workers Bill Oxley and Barry Withrow were killed in the Aug. 28, 2008, explosion in the Bayer plant’s Methomyl-Larvin unit.

The U.S. Chemical Safety Board blamed the explosion on “significant lapses” in plant safety practices and prompted warnings during a high-profile congressional hearing that the incident could easily have been “a catastrophe rivaling the Bhopal disaster.” After Bhopal, other chemical companies had stopped storing large quantities of MIC, switching to making the deadly chemical as it was needed.

Despite repeated pressure from local citizens, the Institute plant had never made such a change. But a year after the 2008 explosion, Bayer announced a plan to curb its MIC stockpile by 80 percent, and then in February 2010 announced a plant management shakeup. Then, in January 2011, Bayer said that it was phasing out the production and use of MIC as part of a corporate restructuring that the company said at the time would cost the Kanawha Valley about 220 jobs over several years.

Bayer officials said that move was the result of the company’s agreement with the U.S. Environmental Protection Agency in August 2010 to phase out the pesticide aldicarb because of concerns it poses “unacceptable dietary risks,” especially to children. Company officials also cited a 1995 pledge by Bayer to move away from products that global public health officials believe are especially dangerous.

The January 2011 announcement also included plans to cease production of carbaryl, the active ingredient in the company’s well-known Sevin brand pesticide. Aldicarb and carbaryl are both part of the carbamate family of pesticides, named so because they are made in part with carbamic acid, and use MIC as a key ingredient. Both products have “in recent years … been largely substituted by newer products,” Bayer has said. Since those announcements, Bayer had noted the “gradual closure of production facilities” at Institute as part of its annual report.

Bayer said Monday that its manufacturing presence at the site “has declined over the past several years” following that 2011 decision. “Without additional production capacity, Bayer CropScience does not have the critical mass needed to make continued ownership of the site economically viable,” Covington said.

The Institute site was originally built in 1943 as a government operation to produce synthetic rubber for the war effort. Carbide bought it in 1947, operating it until its sale in December 1986 to a French company, Rhone-Poulenc. The plant was later bought by Aventis CropScience, and then by Bayer. Carbide became a subsidiary of Dow in 2001.
by Ken Ward Jr., Staff writer