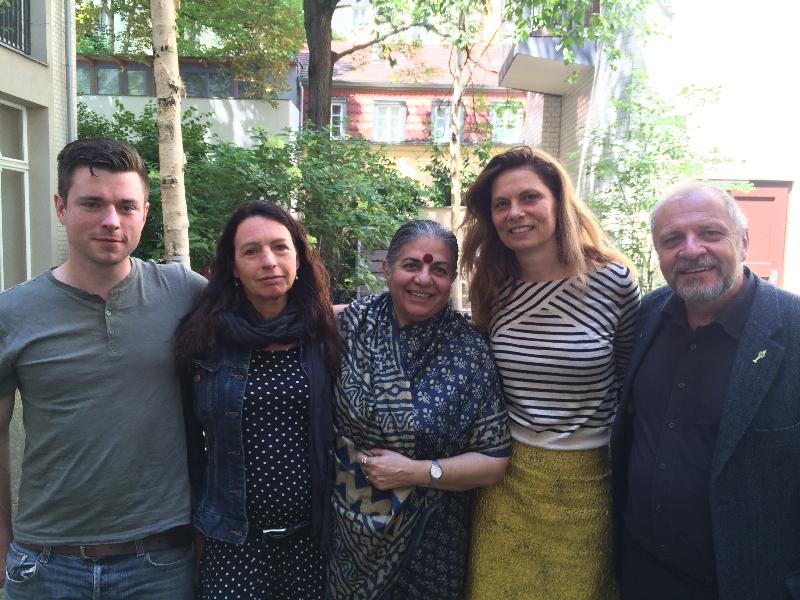 Opposing the BAYER and Monsanto Merger

The fight for a GM-free agriculture must be strengthened

Recent developments in, and new aspects of genetic engineering in agriculture and food took center stage at a press conference on June 27th in Berlin, jointly organized by Birdlife International NABU Germany, Navdanya International, IFOAM – Organics International and the Coordination against BAYER-Dangers (CGB).

In her welcome message Dr. Steffi Ober introduced NABU, highlighting its criticism of industrial agriculture, which threatens national and global sustainability and biodiversity goals: “Industrial agriculture, as it is practiced today in Germany and throughout the world has no future. In order to reach the climate change targets and achieve global justice, a transformation to ecological agriculture is long overdue. To do this we need diverse and innovative farmers, breeders as well as technology developers, who are regionally rooted, that is to say the opposite of global, large-scale monopolists.”

The press conference addressed the alarming intentions of a merger agreement between BAYER and Monsanto, which the new Managing Director of CBG, Antonius Michelmann commented as follows: “A merger between Bayer and Monsanto would mean a new dimension of global monopolization of the food sector and detrimental impacts on millions of small scale farmers, a greater crumbling of food sovereignty and a direct threat to the environment and people’s health. Instead of food production and nutrition being centered on ‘poisons and genes’ for short-term profits, we need an agriculture that maintains the livelihood of mankind and the environment for future generations to come.“

The press conference revealed a general consensus that the upcoming Monsanto Tribunal (link is external), that will take place around World Food Day in October, will become an important milestone for the resistance movement against the monopolistic interests of corporations like Monsanto and Bayer. The aim is not only to strengthen this opposition, but to significantly increase its impact.

World-renowned activist, eco-feminist and Laureate of the Alternative Nobel Prize Dr. Vandana Shiva from India spoke about the forthcoming Monsanto Tribunal. She also made an important remark about the danger and the illusory promises of newly developed technologies for genetic manipulation: “There are two new attempts to rescue the failed biotech illusion which was supposed to end hunger and all agriculture problems, including pests and weeds - 90% of the corn and soya goes towards Biofuel and animal feed, it contributes to starvation, not feeding the world and instead of controlling pests and weeds, it has created super-pests and super-weeds. There are attempts to introduce new false GMO miracles such as gene editing, which, while further scrambling the tree of life, are straightforward attempts at biopiracy. The send rescue attempt is through mega mergers such as the announced merger of Monsanto and Bayer. But Monsanto and Bayer have acted as one already in the past, namely with regards to agent orange, the chemical weapon and killer of humans and the environment, and their ownership is common today. Thus the merger is nothing but a face saving rescue operation. We need to promote proven and sustainable options like organic farming. GMOs, old or new, have no role in feeding people or protecting the planet.”

IFOAM – Organics International Ambassador Bernward Geier assured solidarity and support to the Tribunal and to the fight for a GMO-free world on behalf of the global organic movement. The prominent chef and beekeeper Sarah Wiener concluded: “Up until today the proponents and supporters of GMOs have not provided any evidence that GMOs offer benefits for people and the environment. Genetic engineering is not the solution. We need an agriculture that respects nature instead of fighting against it. At present the winners are the big corporations and the losers are the small farmers, who slip into dependency. Before new technologies like CRISPR / CAS are applied, a thorough risk analysis has to be carried out and, at each step of the way, the European precautionary principle must be safeguarded.”

If you can’t join us at The Hague, we invite you to organise or join a People’s Assembly in your area.